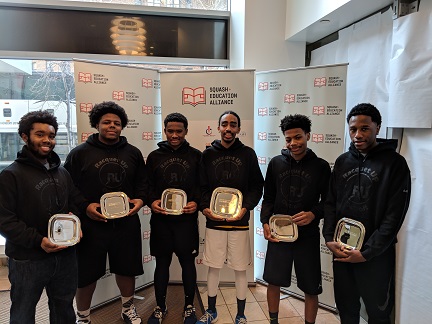 After years of dominance by East Coast programs from Connecticut, New York, and Massachusetts, six young men from Detroit have broken through with a victory in the National Urban Squash Team Championships.

Aaron Levy, Edward Brown, Quran Davis, Darryl Washington, Jr., Antwan Ramsey, and J’aMonte Patmon swept the competition in New York City, winning the “Boys Under 19” age division in a tournament which fielded more than 500 players from 18 cities in the U.S., Canada, and even Colombia.

This victory marks a major accomplishment given that eight years ago a public school student in Detroit would have been hard-pressed to find access to a squash court, let alone world-class training.   Racquet Up offers year-round squash instruction and competitive opportunities coupled with intensive academic support, community service activities, college exposure, and long-term mentoring.  The program, which operates exclusively at the Northwest Activities Center, has grown to serve more than 100 girls and boys in 5th through 12th grade.

Emma Head, Racquet Up’s Squash Professional, said:  “It’s a testament to the hard work and commitment of these young men, not just this weekend but over the last 8 years week-in and week-out, and also a tribute to their dedicated families.  Their grit and desire to win has paid off in a big way.  We couldn’t be prouder.”

High school senior and 8-year team member Edward Brown commented: “Racquet Up Detroit is finally on the elite list of national championship teams.  It was a long time coming, but we all worked hard and earned it.”