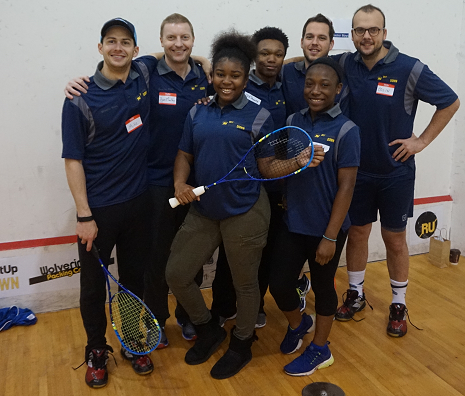 2017 Double Down a huge success

This year’s Double Down event on May 6th was a great success – an amazing $145,000 was raised through the remarkable efforts of our teams! This went far beyond the fundraising goal of $125,000.

The event brought together some of Detroit’s most eager squash enthusiasts, and the competition was spirited! The sportsmanship and camaraderie were a fitting tribute to the late Tom Shumaker, the dear friend and supporter of Racquet Up who founded the Double Down five years ago.

Congratulations to Mike LoVasco’s Boaster Boys on winning the overall title after dominating the singles competition. They were closely followed by Keepin’ It Rail, who not only performed strongly in the singles and doubles, but also claimed the award for the best team name. The stars of the fundraising competition were the Queens of the Court, led by Racquet Up’s squash pro, Emma Head, and Maggie Durant, of the Detroit Athletic Club – they raised over $23,000!

We are grateful to all of the donors, volunteers, team captains, players, and students, who contributed to this year’s Double Down. Thank you especially to Mike LoVasco and Paul Flanagan, the event co-chairs, for their leadership in making this year’s event a success. Our gratitude also goes to the event sponsors, Wolverine Packing Co., SVS Vision, the Detroit Athletic Club Foundation, and Gyro. We truly could not do this without you!